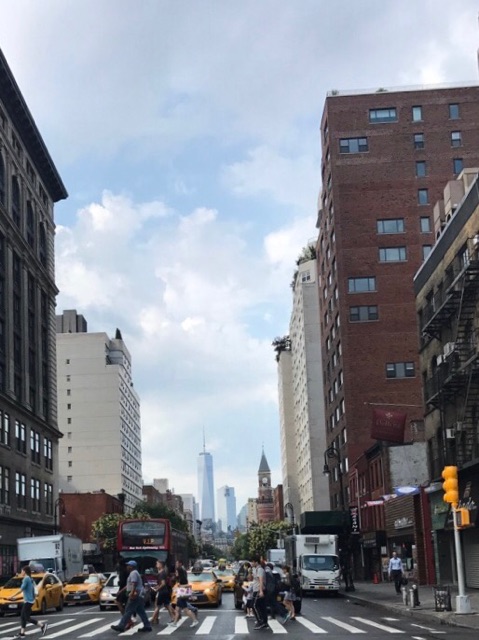 As a lifelong New Yorker, I have always had a great love for my city and its iconic skyline. Growing up on Staten Island I had the best of both worlds – a safe, quiet suburban environment juxtaposed with the excitement of the big city. It was a satisfying blend of chaos and calm. As a teenager I would take the Staten Island Ferry into Manhattan and bop around Greenwich Village going to the record and vintage clothing shops. The Ferry was the best tour, a free trip past the Statue of Liberty and a dramatic approach to the buildings that made up downtown Manhattan. No building was more awe inspiring to me than the World Trade Center. Even as a young girl, making that approach by boat, I knew then that I would make Manhattan my home and that I would someday “make it there”.

After earning my MBA, I moved into Manhattan and began to build my adult life. A life that included a significant other who was a stereotypical Wall Street Warrior. Working hard and playing hard was an understatement. We had a lot of highs and lows during our relationship. We led a life that was very pretty looking from the outside but from the inside it could be very dark. While my personal life was fraught with chaos, I had my rock – my job. My one companion that was stable and true. I was again living a life of contrasts – one part was very secure and the other was the opposite.

Work for me had always been a great escape because it was a place that was, for the most part, emotion free. Throwing myself into work brought good things. I gained recognition and was rewarded for my hard work. The more I put into it the more I got out of it. Personal unrest led to greater professional achievement. My chaos and calm paradigm came to the forefront in September 2001. That time in my life is one about which I speak very little. I had a full view of the events from three blocks away and my significant other worked and died on the 101st floor of the World Trade Center. The details of that day are burned in my memory from the time he left our apartment to his final goodbye on my work phone to walking home through rubble, dust and despair. Like for so many that day, my world had been turned upside down. The events of 9/11 and their aftermath shaped my career in significant and meaningful ways that still resonate with me today.

Post-9/11 I had to regroup and learn to live in my new reality. In the months that followed I learned three powerful lessons:

When in Doubt, Go With What You Know – I dove more deeply into my safe space, which was at this stage my job. Around the office my colleagues treated me as if nothing had happened. Being in that environment helped me heal. It helped me get back to being me, not the me who lost someone in 9/11. Me, the competent woman who could lead teams and get stuff done. It was no one’s job to baby me or feel sorry for me. It was a place where everything was “normal”. There was a job to do and there were expectations on me that needed to be met. I had no choice but to step up.

Moving Forward is the Only Option – With a traumatic event getting caught up in the “what ifs” and the “what could have beens” is inevitable. I rewrote the scenarios of 9/11 in my mind over and over. In a way, I felt that I had to because it was my way of never forgetting. I had to do a lot of work to accept that letting go didn’t mean I didn’t love or didn’t hurt or didn’t care. It simply meant that I had to live. Part of living for me was accomplishing things. What better place to accomplish than on the job? Simply driving toward finishing job tasks pulled me back to a place where I could look ahead to what was next rather than staying stuck in what could no longer be.

Count on Yourself – I can’t say this enough. Unfortunately, it’s a concept that many women discount. No spouse, company or family member will take as good care of you as you will of yourself. Financial dependence is not something to aspire to. Be capable, do the work, make a difference and you’ll reap the greatest benefit – independence.

Life is a series of tests, both personal and professional. We truly don’t know what we’re capable of until we’re pushed to our limits.